Tetrahydrocannabinol (THC) is the psychotropic component of cannabis and is responsible for the high. Therefore, cannabis in this sense also belongs in Switzerland under the Narcotics Act as a prohibited substance. However, the Swiss Federal Office of Public Health (SFOPH) describes CBD as having the potential to calm and relieve pain. CBD does not have an intoxicating effect. So where is cannabis legally located? Here you will learn everything about the legal situation of cannabis in Switzerland. 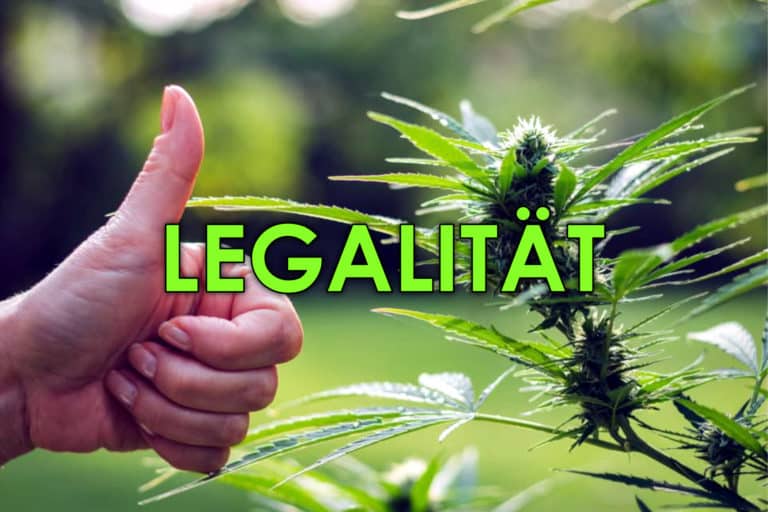 There is cultivated cannabis, which is legal in Switzerland. These are flowers and
CBD products
that contain less than one percent THC. Thus, they do not fall under the narcotics law. Commercial hemp products below the 1% threshold may be legally sold and purchased, subject to certain conditions. However, when we talk about marijuana, we are usually referring to the intoxicating cannabis in the form of weed or hash. In Switzerland, possession and consumption are prohibited. But even there, the legal situation is relatively mild compared to other European countries.

1 Anyone who prepares only a small quantity of a narcotic drug for his own consumption or supplies it free of charge to enable simultaneous and joint consumption by a person of more than 18 years of age is not liable to prosecution.

2 10 grams of a narcotic drug of the cannabis effect type shall be regarded as a de minimis quantity.

That’s what Swiss law says. The bottom line is that possession of THC-rich cannabis up to 10 grams is decriminalized. Adults over the age of 18 who are caught with intoxicating cannabis must expect a fine of CHF 100, but only if the amount is over 10 grams. 10 grams is considered a de minimis amount by law. They’ll probably take the flowers off you.

In order for cannabis products to be sold legally, certain regulations must be met. One of them is that the THC content is below 1%. CBD as a cannabinoid is exempt from the narcotics law, as it does not produce any proven psychotic effect. However, distribution requires conditions that determine the quality of the products sold. We at Goodvibe GmbH also only offer products that have gone through these processes.

Since we sell and promote CBD as a lifestyle product rather than a pharmaceutical, our products must fall into the following categories. Each category has certain requirements that we must adhere to for legal distribution:

falls e.g. into the food and cosmetic category.

Article 7 of the Foodstuffs Act (Art. 7 LMG) stipulates that ingested products must be safe. Food that is harmful to health or unsuitable for consumption is considered unsafe. The Federal Council defines the safety requirements.

In the case of cannabis-based foodstuffs, there is also the regulation on “maximum contaminant levels”, among which THC is considered an intoxicating “contaminant”. This is set by law at a maximum of one percent.

CBD as a tobacco substitute

which are smoked as a primary application. These too must not contain more than 1% THC and are exempt from the Narcotics Act. Legal flowers may be sold as CBD flowers on the internet or at the vegetable market, for example. However, as a tobacco substitute, the flowers are subject to tobacco tax.

The ambivalence here lies in the visual confusion. CBD flowers can hardly be distinguished from THC flowers, as they look the same and smell just as strong. Therefore, there are always raids, in which it must be determined by the authorities that the THC content is really less than 1%. Even the police cannot tell the difference during spontaneous checks. For the buyer this means to keep the receipt after the purchase.

We say to that: It is what it is, unfortunately. 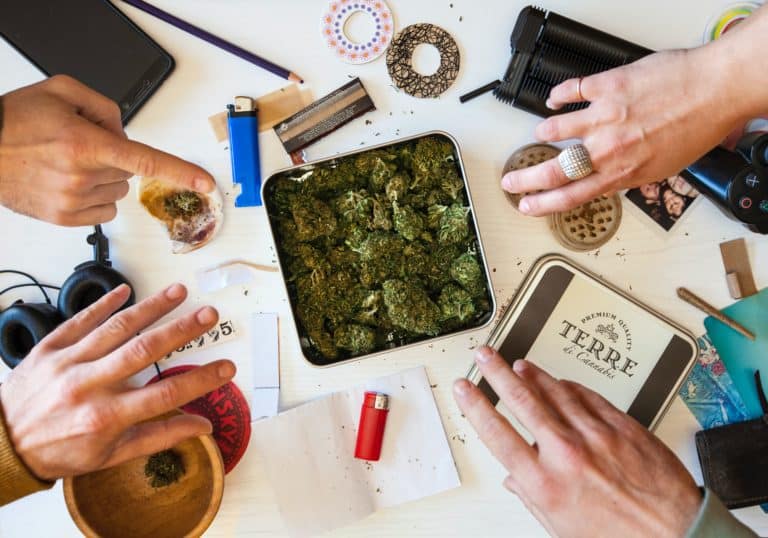 The first and only medically approved cannabis product to date is Sativex®. This is prescribed for chronic nerve disorders, such as MS or severe epilepsy. Nevertheless, Sativex® is a full-spectrum drug with a high dosage of THC and therefore requires a prescription from a primary care physician. For a while now, there has also been no need for an exemption from the BAG, as the GP requests it. The medical use of cannabis is legal in Switzerland.

The first CBD-based drug is Epidiolex®. It is the result of intensive research with studies on the treatment of incurable childhood epilepsies, such as Dravet syndrome or Lennox-Gastaut syndrome. Epidiolex® is 98% CBD with a very low THC content of <0.2%.

Grow your own cannabis

In Switzerland, it is permitted – even privately – to grow
Growing cannabis yourself
. CBD-grown seeds can also be purchased, as long as you don’t have bad luck with customs due to foreign orders. Here, however, the amount of THC is again crucial. Strains with more than one percent THC may not be grown or cultivated.

A permit is required for cannabis cultivation with a THC content of more than one percent. This must clearly show that the cannabis is being grown for specific medicinal purposes, research or medicine.

In Germany, for example, growing your own is completely illegal. Also for low-THC cannabis. The German Narcotics Law does not distinguish between different cultivars.

Switzerland was almost ready to allow the use of cannabis for research purposes. In 2018, Parliament very narrowly rejected the cannabis licensing application. The legalization was rejected by a vote of 96 to 93.

The conservative and Christian parties voted against on the grounds that cannabis legalization would accelerate free consumption. Socialist and liberal supporters backed the motion, arguing that legalization would promote accessibility for academic studies. Research into cannabis has resulted in a better understanding of how it works. They were additionally of the mindset to relax the possession and sale of cannabis. 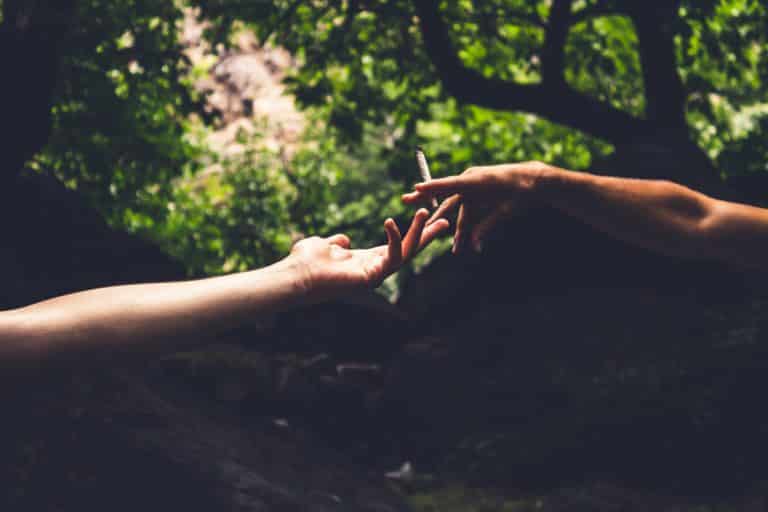 Since the legalization of CBD cannabis in 2015, the market has been growing rapidly. Where in 2015 it was just under CHF 4 million in sales, in 2019 it rose to a whopping 60 million with over 600 CBD retailers. The state also took CHF 15 million in taxes as a result. Compared to Canada, which in just under half a year…
186 million dollars from cannabis taxation
took in.

We hope that something will happen, because the cannabis business will definitely be profitable for the state as well. Goodvibe GmbH supports the movement of cannabis legalization. There’s no good reason not to, is there?

Arguments such as that roadworthiness will also eventually diminish with mass consumption of <1% flowers is a poor argument. If you manage to get “high” from what feels like 2 kilograms of CBD flower, send us your red eyes! We’re excited! kundenservice@goodvibe.ch. We’re telling you that’s not possible, because the overwhelming amount of CBD biologically counteracts the THC. The cumulative argument is therefore false and scientifically unfounded.

Or, that even top politicians claim that the trade has a lot of sales as a result because consumers are trying to score a high. Really? That’s not the point! Who buys CBD flower to get high from it? You just can’t do that either.

Rather, we offer products that can give a real, anti-psychotic effect. CBD has a very different effect than THC. However, for those who enjoy the taste of flowers and don’t necessarily want to be high, but relaxed or “fit”, we recommend the 100% legal CBD flowers. These can be safely purchased from us at the CBD Online Shop.

Google Rating
5.0
Based on 88 reviews

Sebastián Cristoff
11:54 10 Nov 20
Great products, great varieties, great atmosphere. They were very kind to me as well. I needed help for my college thesis about the hemp industry in Switzerland and were very happy to give me a hand.

murielle leutwiler
11:44 16 Oct 20
Very happy with the oil!! It helps me to relax and sleep better! But the main reason why I really appreciate this product is because it helps me with my migraines! Thank you so much and I will recommend it for sure to my friends!!

SafeSide Life
12:17 14 Oct 20
Great team that deliver a great service with super clean execution. Just what one wishes how every online service should be!

Orestes Gutierrez
10:38 26 May 20
They provide above and beyond a good vibe! I am impressed with the quality and variety of their products, delivery and response times AND (last but not least) the additional information provided regarding CBD products: This was very useful, clear and most importantly, scientifically verified! Cheers <3

Dragoș Badea
09:09 30 Apr 20
Good vibe is completely an understatement! They'll make sure to go above and beyond your usual vibes.